This post is a slightly edited version, of one that made the rounds back in 2017. SD2010 is still looking for the ORIGINAL to give them credit. 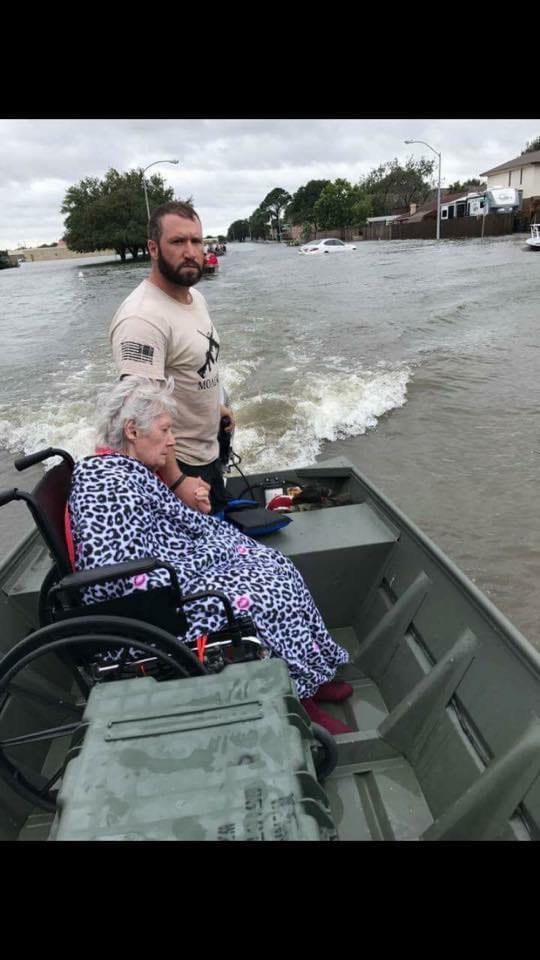 Let this sink in for a minute…..Hundreds and hundreds of small boats pulled by countless pickups and SUVs from across the South are headed for South Carolina, Georgia, and Florida. Almost all of them driven by men. They’re using their own property, sacrificing their own time, spending their own money, and risking their own lives for one reason: to help total strangers in desperate need.

Most of them are by themselves. Most are dressed like the redneck duck hunters and bass fisherman they are. Many are veterans. Most are wearing well-used “gimme-hats”, t-shirts, and jeans; and there’s a preponderance of camo. Most are probably gun owners, and most probably voted for Trump.

They are not all democrats, nor are they all republicans. They are the ‘Melting Pot’. They are welders, and plumbers and electricians, and carpenters, and auto mechanics, and BBQ pitmasters, and farmers, and produce managers from your local Piggly Wiggly, and a plethora of other occupations.

They are White, Black, & Asian. They are of Hispanic, Irish, Scottish, German, Italian, African, and other ancestry backgrounds. They are Yankees & Rebels… Penn State Fans alongside Alabama Fans; they are Chicago Bears & Green Bay Packers fans — working hand in hand for a common cause. Some prefer Country music, some like Hip Hop / Rap.

Not only are they pulling little john boats behind their trucks… Some are pulling utility trailers filled with water, bleach, can goods, Vienna Sausages & Saltine Crackers, diapers, tampons, soap, toothbrushes, mops & brooms, blankets, and other supplies that are needed.

I wish there was a SINGLE WORD that we could use to describe these heroes… OH WAIT, there is:

This is “THE MILITIA!”

These are the people the Left loves to hate, the ones Maddow mocks. The ones Maher and Olbermann just *know* they’re so much better than.

These are The Quiet Ones. They don’t wear masks and tear down statues. They don’t, as a rule, march and demonstrate. And most have probably never been in a Whole Foods.

But they’ll spend the next several days wading in cold, dirty water; dodging gators and water moccasins and fire ants; eating whatever meager rations are available; and sleeping wherever they can in dirty, damp clothes. Their reward is the tears and the hugs and the smiles from the terrified people they help. They’ll deliver one boatload, and then go back for more.

When disaster strikes, it’s what men do. Real men. Heroic men. American men. And then they’ll knock back a few shots, or a few beers with like-minded men they’ve never met before, and talk about fish, or ten-point bucks, or the benefits of hollow-point ammo, or their F-150s and their Chevy Z-71s.

Respectfully submitted by SilenceDogood2010 this Fourth Day of September in the Year of our Lord, Two Thousand and Nineteen. Godspeed to all of our 1st Responders.

I'm just a concerned citizen. I believe that the Founding Fathers created a great Republic & it's slowly falling apart at the seams. View more posts

This site uses Akismet to reduce spam. Learn how your comment data is processed.